A week in an Anglican Monastery

Share a week in the life of an Anglican Monastic Community - a short experience on the lines of the successful TV Programme ‘Monastery’. Thus ran the words of the advertisement which leapt out at me from the page! I had watched and enjoyed the programme when it was aired but my only real exposure to this way of life had been a few brief trips to an Anglican Convent in Wantage to visit my Wife’s Aunt who is a Sister there. I had never imagined myself actually being part of a religious community for a period of time, so this seemed too good an opportunity to miss.

Also, I needed to do some serious thinking. I had reached one of those crossroads which many of us encounter in our lives, made even more intense by being told that I might have a Christian vocation. Accordingly, what better place to spend time trying to make sense of everything than in a community steeped in and surrounded by the love of God?

Having arrived at the Community of the Resurrection in Mirfield, Yorkshire, I must admit to being a little disconcerted on first meeting the Brothers. I had feared a fuss, an over effusiveness in their welcome but instead found calm, genuine Christian love bidding me as an equal, asking no searching questions nor making quick assumptions. This was so refreshingly different to the kind of experiences most of us have when meeting people for the first time that I knew I was in an environment where things were going to be very unlike my usual world.

Two other aspects were forcibly borne upon me at an early stage. One was related to the way the ‘Monastery Week’ - as it was called - had been planned. I had anticipated a detailed timetable; a carefully crafted structure to the week, with concentrated preset periods of work, study, prayer etc, all mapped out to maximise my time there. However, whilst there was a “provisional timetable” for the week, this seemed nothing more than a skeleton framework with large chunks of the days unaccounted for. I soon realised why: God had been allowed to take control! Brothers’ faith and trust in God was clearly such that they knew He would be at work during these times, allowing things to happen in His way. I and the other guest for the week, Chris, didn’t actually need to be told constantly what to do and when to do it; rather, God would make things happen (and He did). As it turned out, our days were very full as we took every opportunity to experience as much as we could about life at CR.

The second aspect concerned silence. I was grateful for the guidance notes in my room on this, explaining that silence creates the space to hear ourselves think and to find God’s presence. Armed with this, and the reassurance that silence is not threatening, I was able to make positive use of this all too rare commodity. In fact, I soon realised that there are different kinds of silence! For example, that experienced in CR’s grounds is not actually silence at all as there are still the sounds of birdsong, trees rustling in the wind, even distant traffic. Rather, it is a peace and tranquility which I found absorbing and fulfilling.

Silence in the corridors I perceived as a kind of ‘respectful’ silence; respectful to those in adjoining rooms who might be reading or praying or even sleeping! Nevertheless, I was able to use this dimension to prepare myself for wherever I was headed, even though for the first few days I would set off at my usual breakneck speed. I consciously had to keep telling myself to “slow down, slow down”! By contrast, I found the silence in church to be a sort of ‘electric’ silence; an atmosphere supercharged with the closeness of God and an outstanding opportunity to reflect deeply on all that was being said and done. Further, periods of silence in a church service can sometimes be embarrassing for the congregation, who begin to shuffle and fidget and look round to see who has forgotten to do something. Yet this was never the case at CR; the silences in the services there were truly reflective and contemplative.

Then there was the Greater Silence, lasting from the end of Compline right through to 9.00am the following morning. This was like nothing I had ever experienced before and the first morning I was there, all I could say to Chris when it ended was “Wow!”. It was the Greater Silence, more than anything else, which for me enabled everything to take on a new depth of meaning, for Bible readings and prayers to be enhanced exponentially and it was during these times that I felt closest to God. Chris and I would inhabit the library in the Retreat House after Compline and work away on our journals in a silence which felt both comfortable, like a warm blanket, and so very precious.

Finally, in terms of the different types of silence, were all those silent breakfasts and some other meals. These I found the most difficult to get used to. Every chomp of my cornflakes or bite of my toast sounded to me like a bushel of loose rubble being dropped from a great height! Also, I didn’t quite know where to look when in proximity to the Brothers. To ignore somebody totally seemed very insular yet I felt that to make a smile of acquaintance might be deemed disrespectful to the purpose of the silence. In the end I just did what everybody else seemed to be doing; not worrying but getting on with whatever was necessary and using the silence to contemplate on all I was learning. I did, though, have one embarrassing moment when my toast became stuck in the toaster and black smoke started billowing forth. Trying to elicit urgent succour in a silent environment is not easy but thankfully one of the Brothers saw my frantic arm waving and sallied forth with a pair of wooden tongs!

This incident was actually quite amusing and, as the week progressed and everybody inevitably drew closer together, I was able to discern the Brothers’ worldliness and, not least, their sense of humour. As the guidance notes back in my room at the Retreat House said, quoting C.S. Lewis, “Angels can fly because they take themselves lightly”. Clearly worshipping God is a serious business but the lighter moments are important and necessary and I believe and hope that by the time I left Mirfield my own dispositions in this regard were beginning to surface. In fact, I had gone to CR to come closer to God, hoping to see a clearer direction in which to move on and in the course of doing this had discovered quite a lot about myself, thanks in part to the many conversations with the Brothers which took place over the course of the week.

Before closing these reminiscences I must mention one other aspect which made a great impact on me; the way the Scriptures are studied at CR. Lectio Divina was new to me, although I have subsequently come to recognise that this is a widely practiced form of Bible study, particularly in religious communities. To sit in silence, reading and re-reading the same passage over and over again might seem a fruitless exercise but in actuality it is quite the reverse. Some of the passages chosen were, I thought, quite familiar to me but studying them in this way and listening to the comments and prayers afterwards brought out so many things I had not appreciated before. Indeed, at one point I was absolutely convinced that no other version I had seen contained a particular sentence which carried so much weight! It was just that in my previous readings I had simply not taken the time to study the passage in the way Lectio Divina offers and to see what was so significant and was really there all the time.

At the end of John’s Gospel, the author writes “there are many other things which Jesus did. If they were all written down one by one, I suppose that the whole world could not hold the books that would be written”. Well, there are many other things which I did, and which happened to me, during ‘Monastery Week’. I’m not sure they would give rise to more books than the world would hold, but if written down they would certainly create a formidable tome. In fact they do: I have in front of me now the journal I kept whilst at CR recording all that occurred and my thoughts at the time. This, coupled with the Offices which I am trying to continue saying when time and occasion permit, helps keep my experience of ‘Monastery Week’ at the forefront of my mind. I remain immeasurably grateful to all the Brothers for allowing me to be part of their family for those truly halcyon days. 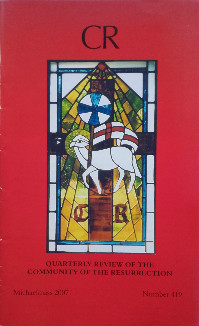