I started to pull together the information below from public, non-copyright sources with a view to undertaking further researches. Unfortunately, time and other commitments have prevented this to date but I nevertheless set out here the information I have been able to glean so far. If you have further details which you think should be included here (or, indeed, any corrections or observations), do please make contact with me.

Clophill is a village situated about eight miles south of Bedford, lying immediately east of the A6. Turning off that busy road, one enters the long High Street. After some distance this runs past a narrow track climbing up to Clophill Old Church, now a Visitors’ Centre, continues beyond the church of St Mary the Virgin - built in 1848 to replace the original church, which is also passed a little further on the left - and, having become Shefford Road, eventually escapes the dwellings and reaches a ninety degree turn to the right. Just beyond this bend, behind a farm on the left, lies the location of what was once the Benedictine Monastery of Beadlow Priory. 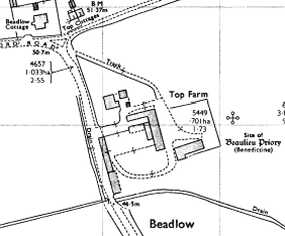 The site, immediately east of Top Farm, was previously used, it seems, as a hermitage (by one “Ralf the Hermit”) but sometime between 1140 and 1146 it was granted to be a cell of the great St Albans Abbey by endowment from the then landowner, Robert D’Albini, Lord of the Manor of Clophill and Cainhoe (which had been in the D’Albini family since at least the time of the Domesday Book). Making over lands and other rights to the Abbey was by no means unusual at that time, for it was held in high regard and its influence extended over a wide area.

The exact date of the Priory’s foundation appears to be elusive. The earlier date of 1140 is when Robert’s Father, Henri D’Albini died and Robert inherited the lands and entitlements, so the foundation must have been after then. On the other hand, the later date of 1146 is when Geoffrey, Abbot of St Albans, died. The endowment was made during his tenure so it must have been accomplished sometime before this.

At the time the grant was made there was already an existing cell of the Abbey at Millbrook, about five miles away from Beadlow. When the new Priory, which also came to be known as Beaulieu Priory (Beaulieu is one of the Anglicised forms of the Latin “Bello Loco”) was built, the two communities merged, the Millbrook monks transferring to Beadlow.

Given as part of the endowment by Robert D’Albini was the advowson (right of presentation to the living) of the (old) church at Clophill and about 60 acres of land, with a further fifteen acres of land given in return for services at a chapel at nearby Cainhoe three times a week (This chapel eventually fell into disuse, even though the tenancy of the Manor of Beadlow had been granted to the Priory to sustain in perpetuity four monks to serve the chapel).

Robert D’Albini also endowed to the Priory the advowsons of Millbrook church (about seven miles away to the west) and Ampthill church (five miles to the west) plus a mill, a wood and various other pieces of land. One Amaury de St. Amand also endowed a small parcel of land in return for services at a chapel at Haynes, to the north of the site of the Priory.

Other members of the D’Albini family continue to be part of the story of Beadlow Priory. right of presentation to the living of Milton Ernest church, some 15 miles to the north, was held by the family but this too was granted to the Priory, possibly around the time of its foundation, by the founder’s Mother Cecilia (or Cecily) D’Albini. However, when the son of the founder wished to take this right back for himself, a protracted legal dispute ensued, being considered by the Curia Regis (King’s Council). It would seem that Ceclia’s Grandson, Robert de Middleton, eventually regained the right of presentation, presenting John de Lega to the living of Milton Ernest in 1222 but in 1275 the advowson was returned to Beadlow Priory by Bishop Gravesend on account of the Priory’s poverty.

At the end of the thirteenth century, the Bedlow monks held a feast on 22 July at which a hundred poor people were fed at the cost of a penny a head and at which prayers were offered for Queen Eleanor, late wife of King Edward I, who had died in 1290. On the third anniversary of her death, on 28 November 1293, the Prior was granted the right to hold a fair from 24 to 26 July each year.

A fire occurred at the Priory in 1394 and Margaret, Countess of Norfolk, gave money towards its restoration. Walls were also built at that time to enclose most of the site, at the expense of St Albans Abbey.

The names of the Priors of Beadlow which are definitely known are:

The original endowment provided for five monks (four to serve Cainhoe and one Haynes) and the Community never grew to be large. It was, indeed, one of the poorest cells of the Abbey, if not the poorest: the Priory had been unable to contribute anything to the Abbey between 1396 and 1401. It is likely that, eventually, the numbers began to dwindle, the buildings to fall into disrepair and poverty became a very real threat, thus making the Community no longer sustainable.

The temporalities of the priory in 1291 were valued at £26 7s 10d and the spiritualities were valued at £17 6s 8d, out of which four vicars' stipends were to be paid. Only two small fractions of a Knight's fee in Clophill and Flitton are entered as held by the prior in 1302 whilst only one such was recorded in 1346 and 1428.

The Abbot of St Albans, John of Wheathampstead, had made a visitation on the Priory in the early fifteen century and found it in such a poor condition that it barely supported two monks. After reflection, he decided to close the Priory and unite it with St Albans Abbey. In 1428 the remaining monks were withdrawn from the Priory but a Chaplain remained to fulfill the terms of the endowment.

To bring about closure, the Abbot had to gain the consent of representatives of the founder and consent of the Patron, Reginald Grey (Third Baron Grey de Ruthyn) and to obtain a Papal Bull, a formal decree from the then Pope, Martin V. Lord Grey signed a full surrender of all his rights in the Priory in May 1434 and the Papal Bull was granted bearing, interestingly, the names of both Pope Martin V and his successor Pope, Eugenius IV. However, it was an expensive matter to claim and use the Bull so the Abbot accordingly tried to find out from lawyers whether an ordinary Prelate could grant him the necessary Licence.

Whilst this possible course of action was being pursued, the Royal Escheator intervened and declared the Priory to be forefeit to the Crown. A jury was summoned to investigate the Abbot of St Albans's title to the Priory, the lands of which were valued at that time at £12. If this could not be proven, ownership of it would pass to the Crown but, in fact, the Abbot was able to prove his title, probably without difficulty, thus allowing him to close the house successfully in 1435.

revenues of the Priory, stated by the Abbot to be £18 per annum, were applied, amongst other things, towards funding the Abbey’s university students at Oxford, helping to maintain the office of Master of the Works at the Mother house and, it appears, in helping to celebrate the Anniversary of the Abbot himself! Lord Grey de Ruthyn was granted a rent of 20 shillings a year and the Vicarage of Clophill was re-instituted from a Vicarage to a Rectory, on condition that the Rector should say mass three times a week for the soul of the Priory’s founder.

title “Prior of Beaulieu” seems to have survived for a while, although in name only. However, once the Priory was closed the decay of the buildings continued.

However, in due course the Priory disappeared so completely that even its precise location was forgotten. In an 1889 publication entitled “Tourists’ Guide to Bedfordshire” written by the Revd Albert Forster, it is claimed that traces of the Priory’s foundations were still visible. However, by the time of the publication of the “Victoria County History” in 1908, nothing remained to be seen above ground, although some glazed floor tiles and a thirteenth century base had been discovered (and a fourteenth century coffin lid could be seen at a nearby farm).

By the mid-1960s these had all disappeared but excavations were undertaken then by local archaeologists. It seems that locating the site at that time was not, in fact, too difficult as, having just ploughed the area for the first time from grazing pasture, the farmer turned up considerable amounts of mediaeval roof tiles and mortar. archaeological excavations ascertained that the walls followed an approximately north-south and east-west orientation, the foundations having been constructed from roughly shaped sandstone blocks and mortar. Fragments of Totternhoe stone tracery and mullions were found throughout the site.

Also unearthed were numerous artefacts ranging over the full length of time of the Priory’s existence, including animal bones, oyster shells, fragments of glass (including stained glass fragments), pumice stone, a whet stone, a mill quern, and fragments of pottery.

site also yielded a small number of decorated floor tiles. They were scattered in a manner which suggested that the floors were extensively robbed before the building was finally destroyed. The earliest tiles, coarse textured and unevenly fired with a greenish yellow glaze, were made in different shapes and stamped with rosettes and fleurs-de-lis. Reddish brown, finely textured clay tiles with a yellow decoration were also found from a later period. Only one fragment of an embossed, uneven surface tile was found, fired to an even grey core with a light green glaze.

Unfortunately, the 1963-1965 excavations are themselves invisible now, the whole site having assumed the mantle of farmland.

However, further archaeological deposits, including structural remains, were revealed during earth moving works on the site in 1990. Then, in 2005, an Archaeological evaluation was carried out in connection with proposed landscaping and tree planting. Eight trenches were cut and one of these, running parallel with the eastern boundary of the site, yielded a variety of finds, including ceramic tiles, metallic slag, animal bones, pottery and a ceramic stamp or handle. Two other trenches, on the same alignment and to the south, also produced notable quantities of unstratified medieval artefacts. All the finds appear to date from the twelfth to the fifteenth centuries.